I run a company called Envato. There are two hundred and fifty people who work here, and every month our sites notch up thirty-five million visits. It’s a pretty successful business and one I’m very proud of. When we started, I never dreamed we’d get to this level.

In fact, I used to imagine that successful companies were started by people in suits. People who reviewed spreadsheets of business opportunities, had been trained in what to do, and then, perhaps while smoking a cigar, selected one to dominate. But that’s not how we looked when we started Envato at all, and fortunately, we didn’t let that stop us from giving it a go. 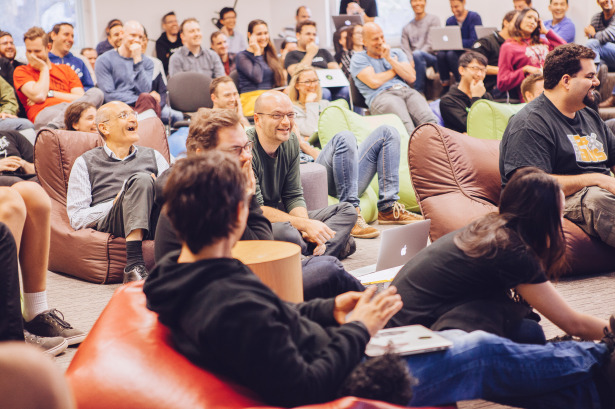 Nine years ago, I, my wife Cyan, and my best friend Jun were three freelance web designers living in Sydney, Australia. Cyan and I had just got married and she wanted to go traveling around the world. We decided that wouldn’t work very well with our freelance clients because they were all local businesses who liked phone calls and in-person meetings. Jun, who lived nearby, was just excited about the idea of us finally starting a business together.

This is us on holiday in 2005, just prior to starting Envato:

So we decided to start an online business. Jun had heard lots of my business ideas before, when we were flatmates at university. They included things like, “Let’s make a cafe that sells shaved ice!” or, “Let’s build a chain of internet lounges”.

Since Cyan and I had been experimenting with selling stock Flash online, we’d noticed there seemed to be a pretty good market for it. There weren’t any existing sites that did just Flash well. And it sounded like a business with no clients or meetings. We pitched it to Jun who seemed to think it was a definite step up from my shaved ice and internet cafe plans.

So we decided to give it a shot. Despite the lack of suits and cigars, I was determined that’d we’d be proper business people. So I went to a bookstore and bought a book on making a business plan. I wrote one, following the book’s template.

Today when I re-read that old plan, it’s quite funny. There are these sections about ‘the creative team’ and the ‘technical team’ when, in reality, they were just one person. There’s a section all about how we would acquire other businesses, even though I had not the faintest idea how that’s supposed to be done (and to this day we still haven’t acquired any).

The first time I visited a lawyer, I was super nervous. I put on my best clothes and was stressed out all morning before the meeting. We didn’t have very much money so I kept double-checking that I was having “a free consultation, right?” (It was indeed free, but once they started working for us, it was very not-free!) We needed titles for ourselves, so I became the “CEO”, but it felt pretty silly to call myself that!

When I look back, there was a lot of stuff I worried about when we started Envato that just wasn’t important. Then there was tons of actual important stuff, and by luck and determination we got a many of those things right.

Not All Business Models are Equal

There are a lot of different business models (here’s a big list of just some of them!) Different models have different strengths and weaknesses. Advertising, for example, can be extremely profitable, but you generally need serious scale to make it work. That’s why companies like Facebook burn cash to grow for many years before switching into profit mode. Many similar companies simply flame out on the way.

One of the early things we got right with Envato was our model. At our core is a marketplace model, and it’s a very effective one for online businesses. More importantly, it was very effective for a bootstrapped business with no cash investment. On our very first day we had revenue. Not much of it, but it was a business that actually made money right from the outset. To be honest, choosing this model was largely down to luck. We’d been observing other marketplaces and thought it seemed effective, without really understanding why.

If you’re just starting out, it’s a great idea to start reading about different businesses in the space you’re trying to break into. Look for the ways they generate their revenue, and the costs associated with growing their model. Most importantly, if you’re new to starting a business, you should seriously consider something that makes money more or less from day one. You may still choose to go for a business where you need to get some scale before you see any revenue, but if you do, go in with your eyes open. These businesses are more prone to error and much more reliant on startup costs.

These days, the phrase ‘lean startup’ has a very specific connotation. But when we started Envato, it just meant don’t have too many costs!

We had three co-founders when we launched, and soon convinced my brother to join us too. None of us got paid (we just logged our hours to be paid back in the future). That meant we had a small, free team working on the business. To make this sustainable we freelanced and worked other jobs at the same time. This was tough going, but manageable. We were all in our 20s with little in the way of commitments or costs.

We used our savings and credit cards to start the business. That means we were very frugal and careful about where and how we spent. It’s stressful when you sweat every dollar. But you can make money go surprisingly far that way!

But perhaps most important was that we put in the hours. There’s no escaping that starting a business requires a lot of time, energy and constant commitment. It’s important not to go totally overboard, but you should be expecting to work a lot of hours.

It took six months to get from conception to launch. We hired a talented freelance developer who I already knew. Together we built a complete marketplace modelled on ones we’d seen. In retrospect, it was a bit over-baked, with features we didn’t really need and complexity we could have avoided. But it didn’t really matter. We got the core business model right, and there was less competition back in 2006, so six months to launch wasn’t too bad.

When You Have Something, You Have to Hustle

On day one we made our first sale, and within a few months there was a thousand dollars a week of transactions running through our marketplace. It was pretty amazing, but certainly not big enough for the size of our team. Still, we knew we were on to something.

At this point, I think the most important thing to do is push hard. It’s like when you’re starting a fire. When you see those first sparks you need to act quickly and decisively to get it to take hold and grow.

We worked very hard for this period to expand and add to the small fire we had started. Marketing, campaigns, product improvements, community building, and promotion were the fuel we put into our fire. We went through a long phase of constantly trying new things, measuring, and adding to the momentum we’d gathered.

If you watch any successful new business that’s on to something, you’ll see the same pattern. For example, a business that I have a great deal of respect for is the Canadian startup, Crew. They’re very transparent about what they’re doing, so it’s enjoyable to keep up with what they’re working on.

Early on, Crew discovered they had something. They published a post about how they’d grown from a Wufoo form to a $25k in jobs in 3 months. That’s some excellent evidence that you’ve found a solid something to build a business around.

Since that time, their blog has been a constant stream of reporting on interesting experiments, marketing projects, and approaches. Things like side projects,  transparency about their revenue, opening up their fundraising deck, rebranding, product innovations, and a hundred other things. Some of them translate into success, others stay as experiments. The important thing is that they’re constantly pushing.

That push creates momentum. And momentum is so critical for an early-stage startup.

At Envato, we had a very similar approach. In those early years we tried all kinds of marketing, we built an education network, we iterated our product and design, we expanded into new areas at a wild pace, and we furiously threw wood on to the small fire we’d built.

We Were Unreasonable With Ourselves

To succeed in business you need to be unreasonable with yourself.

If you were being reasonable, you’d stick with your regular job. It’s going to be less work. It’s going to offer more certainty. And it’s probably relatively comfortable.

If you were being reasonable, you’d take early business success and slow down. You’d take profits out of the business and relax a little more.

Being unreasonable doesn’t always end well. Lots of people start businesses that go nowhere. They put time and energy into something that is ultimately not successful. If there was certainly on offer, starting a business wouldn’t be unreasonable!

When I look back at growing Envato, and even to this day, there’s a big dose of unreasonableness. From starting the business in the first place, to expanding beyond Flash (thank goodness!), to reinvesting so much for so long, to staying bootstrapped. Every successful business will have founder stories that are fundamentally unreasonable. It’s sometimes hard to see them because we mostly only read about successes. But these things start with every chance of them going wrong.

When you start a business, you need to be OK with that. It doesn’t mean anything to have a business that fails or folds. You can pick yourself up, dust yourself off and have another go. One of my favourite quotes, and one I have up on a wall in my office, is from Teddy Roosevelt. He says:

The credit belongs to the man who is actually in the arena, whose face is marred by dust and sweat and blood; who strives valiantly; who errs, who comes short again and again, because there is no effort without error and shortcoming; but who does actually strive to do the deeds; who knows great enthusiasms, the great devotions; who spends himself in a worthy cause; who at the best knows in the end the triumph of high achievement, and who at the worst, if he fails, at least fails while daring greatly, so that his place shall never be with those cold and timid souls who neither know victory nor defeat. – Teddy Roosevelt, the Man in the Arena

For the longest time I held onto my early belief that there was some book I was supposed to read, or a degree I should have done, or perhaps a business suit I should have been wearing.

Nine years in, I’ve concluded that business is so fluid and complex that there are no easy answers. And that’s a good thing. It’s what makes it so interesting, so exciting, and ultimately, so rewarding.