Trends in app design change constantly—some fade with time, while others continue to grow and evolve. Most trends are worth considering, however, because with each new fad comes innovation. Our contemporary trends allude to those of the past.

Excellent UI design is all about simplicity and effectiveness. This is why designers strive to achieve functionality—they want to produce navigation so intuitive, users fail to notice.

On the other hand, if users become confused and unable to perform actions, the UI design is a failure.

Why do design trends change? There is no single answer but instead a variety of factors. For instance, the driving force of change in 2015 was hardware transformation and the growing responsiveness of mobile devices.

The numerous mobile apps that appeared on the market quickly transformed popular features into necessities. Additionally, we’re now living in a world where almost 90% of youngsters perform basic operations on their phones.

Other factors are: culture, tradition, branding transformation, and the individual features of certain mobile devices.

Well then, what should we expect in the upcoming year?

Invisible or hidden menus are not a recent discovery. They represent something which has long been going on behind the scenes. Designers, it would seem, are finally ready to release this secret project and meet our expectations.

Don’t be fooled by large screens; mobile apps have never had less space than desktop equivalents. However, they started hiding functionality in order to economize space for viewers.

Many tools are available for this job. The trendiest tools work as navigation drawers, available only when required and virtually invisible when unnecessary. Get ready—many online menus are about to “pare down,” and they’re going to contain options related only to the specific task/situation at hand.

When Touch ID first arrived on the scene, it was used for unlocking devices. However, acute technology observers soon named it the tool of the future. In 2015, Apple presented its revolutionary Apple Pay mobile wallet; and it became clear they were working on something much bigger.

By the end of that year, the company announced that IOS8 would let third party apps (such as Dropbox, Amazon, etc.) accept Touch ID’s thumbprint access method.

Anyone can see the benefits of this approach—manually inserted passwords are virtually a thing of the past, and online authentication is now much simpler and safer.

Technology has evolved, and it is expected it will continue to evolve even more rapidly.

Targeting devices for 2017? Don’t forget wearable technology! Fashion and UI design discovered they are excellent partners, and the market is benefiting most from their partnership.

Apple Watch already launched with a buzz, provoking competitors such as Android Wear to present something even more advanced.

Card design has proven to be an efficient tool for mobile-friendly websites. In fact, helping websites adjust to mobile technology was its original creation purpose.

Cards are helpful because they divide content, place it in the proper parts, and associate it with related information. Besides, using cards enables users to choose actions, therefore showing that a designer is completely focused on their needs.

Thanks to cards, users have the ability to upload multimedia (for instance, videos or images on Twitter) and attract more traffic to that website.

As we already mentioned, culture can be a strong factor to drive changes in interface design. Here are some particular examples:

What does this mean for us? It means apps are more than performers; apps are personalized. Apps are basically our friends.

While personal-level software communication is old news, it has reached an unprecedented state of perfection. For instance, think about Microsoft’s office assistant, Clippy. Clippy was more of a nuisance than an assistant or friend. We didn’t benefit much from his advice, and today he lives on only through memes. (RIP, Clippy.)

In the modern tech world, we are looking for authoritative apps that properly execute our work, time, and needs. Complicated technology has no place in our daily schedule.

Material design is a relatively young, visual language introduced by Google in 2014. It was a revolutionary mobile design discovery that instantly spread through the web.

Today, there are many outstanding apps/websites that use material design, mostly because of its simplified effects (clear gradients, proper layering, and well-executed animation). Material design is tightly associated with card design, which indicates it could be around for many years ahead.

The “less is more” rule is certainly ruling this season. Therefore, designers should preserve simplicity in every aspect, especially when working with color. Take a look at some of the most remarkable and stylish apps—they tend to employ a minimalist approach when integrating color.

Flashy and strong impressions don’t attract as much attention as, say, modest and pastel schemes. However, this doesn’t mean you have to modify your brand’s colors—use your colors, but do so with an elegant and professional touch.

Are there any UI design trends that we’ve missed in this article? Let us know in the comments. 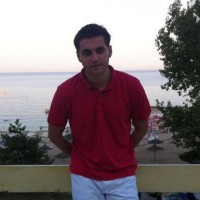 Bogdan is a designer and editor at DesignYourWay. He's reading design books the same way a hamster eats carrots, and talks all the time about trends, best practices and design principles.

Why the Flat Design Trend is Hurting Usability

Are There Better Alternatives to Photoshop in 2016?

The Hamburger Menu: a Tasty or Bland Design Trend?